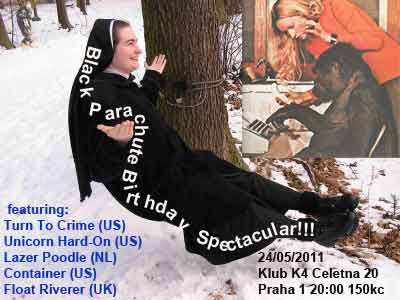 OH MY GAWD! ITS OWR ONE YEARS BEORTHDAY PARTY!!!!

and just look at these amazing bands:

TURN TO CRIME (ex-Awesome Color)
Derek Stanton aka Turn To Crime is better known as lead singer and guitarist with Awesome Color whose trio of maniacal Stooges/MC5 inspired LPs were released on Sonic Youth guitarist Thurston Moore’s label Ecstatic Peace between 2006 and 2010. The band gained worldwide notoriety, touring as headliners and with the likes of Dinosaur Jr and Sonic Youth themselves. In 2010, the band broke-up, but it wasn’t long before Derek had a new sound and a bunch of new songs ready to go under his solo moniker of Turn To Crime.

LASER POODLE (Amsterdam, Netherlands)
Two kids who hooked up their electronic wizardry are challenging the boundaries of electronic dance music. In form of an organic, constantly shapeshifting pulse, played on a pile of electronics and drum machines, Laser Poodle is a sweet late night stroboscopic trip. Laser Poodle is Amsterdam based Fyoelk (ger) and Yellow Galactic Human (dk).
http://www.myspace.com/laserpoodle

CONTAINER (Nashville, Tennessee, USA)
Inspired by the discovery of 90’s minimal techno, Ren Schofield began his Container project in the early months of 2009, applying compositional techniques and musical approaches learned through his background of noise, drone, and cassette collage music to the genre of techno, without combining any of the two. Backdrops of simplistic beats evolve patiently over time giving a distinct focus to each sound introduced and each pattern created, snowballing together with
occasional vocal cassette manipulations into what has been described as ‘outsider techno’ .
http://www.ijustlivehere.org/container
http://www.ijustlivehere.org/overflowmp3.mp3

If you can imagine being bludgeoned to death with a pair of dancing shoes then you pretty much understand what it is to see FLOAT RIVERER live. The Manchester duo, formed in 2010 while hitch-hiking across the UK, delivers all the hooks, punishing the audience with a relentless, often venomous, catchiness. Drummer Kate (also one third of grrrl-punk heroines Hotpants Romance) pounds her two drums in a repetitive, motorik style, her vocal has the rasp and depth of a Holly Golightly and, when she screams, well, she SCREAMS! Guitar player Nick mangles shrill, rhythmic repeato-riffs out of his Telecaster and spits out his lyrics in with a high-pitched androgynous stutter. They're now in the process of recording an LP for summer release.