Review: No Pavarotti - Too Late To Care (Vital Weekly 764) 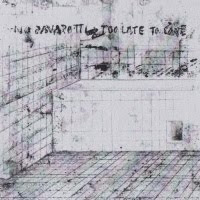 KLaNGuNDKRaCH is a small label from Prague - Czech Republic and they know how to make interesting releases. No Pavarotti recorded in February and July 2010 five songs and released it in a silver carton cover and has a limited edition of 99. I really do not know who are the musicians of No Pavarotti, but that makes no sense because the music had to speak. The five pieces of music are intense and meditative because of the use of repetitive elements. The first track "Behind the Red Curtains" is a slowly developing composition created by long-lasting synths and voice, and ends with a strumming guitar. Some kind of Trap is repetitive by the beautiful use of delays which take care for a base, in the background you will hear some sinister sounds and the composition is completed with a whispering voice. The next tracks continues in the same mood but more noisy and harsh in a subtile way. I'm Never Gonna Surf Again is a singer-song alike track, but lucky with strange background sounds, what make the song interesting. The last track has a more experimental mood, it starts slowly as if it will continue as the first three tracks before, but it develops with restless moments by a bass which is searching for structure. At the end the song ended in song-structure and No Pavarotti is back from the abstraction to the structure. Again a nice release at KLaNGuNDKRaCH.
(JKH)
Vystavil false_trance v 0:42